Fear No ART Chicago welcomes author David Sedaris for its inaugural site podcast.   Click on the podcast below to listen to host Elysabeth Alfano’s interview with Mr. Sedaris, discussing his newest book, “Squirrel Seeks Chipmunk: A Modest Bestiary”, his years living in Chicago and his advice for young authors. photo credit: Anne Fishbein

Listen now to the interview with David Sedaris on Fear No ART Chicago.com Subscribe through iTunes To listen to the interview with David Sedaris now, click the above Listen link or if you would like to subscribe to our podcasts through iTunes, click the Subscribe link above. You also have the option to download an mp3 version of the interview by clicking the Listen link above, right-click the Download link that shows up, and click save-as or download link as to your computer. In the future, all of our webisodes will also be podcasts that you can download and take with you, making listening to Fear No ART Chicago and discovering the artists behind the art easy and mobile! 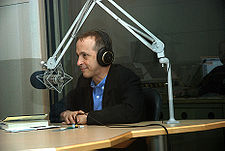 Sedaris was first publicly recognized in 1992 when National Public Radio broadcast his essay “SantaLand Diaries”. He published his first collection of essays and short stories, Barrel Fever, in 1994. His next five subsequent essay collections, Naked (1997), Holidays on Ice (1997), Me Talk Pretty One Day (2000), Dress Your Family in Corduroy and Denim (2004), and When You Are Engulfed in Flames (2008), have become New York Times Best Sellers. In 2010, he released another collection of stories Squirrel Seeks Chipmunk: A Modest Bestiary.
As of 2008, his books have collectively sold seven million copies. Much of Sedaris’s humor is autobiographical and self-deprecating, and often concerns his family life, his middle class upbringing in the suburbs of Raleigh, North Carolina, Greek heritage, various jobs, education, drug use, homosexuality, and his life in France with his boyfriend, Hugh Hamrick.