October was just as fruitful for street art as was September. Street artists are not immune to the cold weather, and the escalating scramble leaves me eager to see November’s work. October saw more political work by street artists than I can recall, most likely due to their arch-nemesis  announcing his retirement. Some artists went with Halloween themed graffiti like Snacki’s piece (see below), this mummy zombie thing, or this Breakfast at Tiffany’s zombie …. which looks like a Threadless Tee.

Banksy’s “You Concrete Me” piece has been covered up (detail of original here).   “You Concrete Me” on first glance looks like a Banksy letdown, until you realize Banksy was using the local aesthetic in his piece. The ridge in the exposed concrete looks like a mouth,  the use of chalk, and the light-hearted sentiment, is  an unusual piece for the usually serious and satirical Banksy.    ”You Concrete Me” was no hit with the street art community however, and was covered up by a vandal almost immediately (vandal also added “Banksy Sucks”).   Street artists being jealous is no new thing,  with Poor Kid being a target of strike-outs last month.

More Anonymous Epidemic stickers popped up in October, this time featuring Chewbacca with different barbers (demon barber here), and the large “radioactive kittens” by an unknown artist have multiplied.  The “I Eat Food” person continues to remind us that s/he eats food,  while another unknown artist stenciled “Get Real” in the shape of a heart. A rash of Brian Bosworth stickers have appeared downtown, as has Portal stencils, and more stikman figures were spotted in the city.

Before I get to the list (which was very difficult to order, more so than usual), I would first like to mention a couple of “taggers”. I in no way see what they do to the city as “art” in the traditional sense of the word, but I do understand their desire to express themselves in the way that they do. So, hello to herts (nice water tower). Humorous name, noteef, and great psycho kool aid man. I see you, MO. Thief, you are every where I look. Amuse, great lettering here, nice water tower, and this is gorgeous and should be my number 10.

Cyro is this month’s “artist that doesn’t belong on this list” because of no new work, but I include cyro because I would like to see more work. 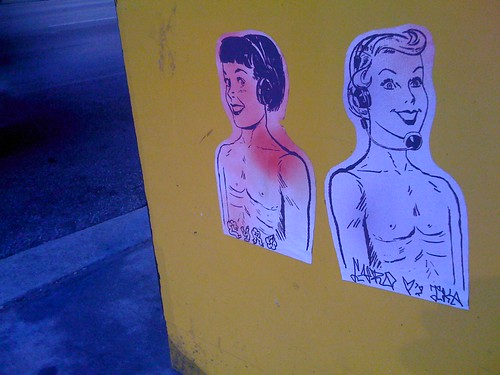 cyro is versatile to the point where his/her  work looks like  different artists. Besides creating stickers of gender-mixes, cyro is know for the all-thumbs character. Here is a cyro paste-up, and here is a board collaboration with nacho (another collaboration, this time with Swiv, can be seen here). It appears as though cyro began his/her street art endeavor in the summer of 2006. A somewhat extensive flickr search shows  the first “all thumbs” character and  cyro’s first board appearing in 2007,  and the men with lady faces began appearing in 2008.  Other notable cyros: drawing on a baby’s face, an installation from 2008,  a rather large collab with nacho from 2008, and this  collab with Bonus. Where are you, Bonus?

cryo is one of those street artists that easily stay up for months, somehow.  Newcity named cyro one of 2006′s best street artists.

Number nine is reserved for all the artists participating in the fabulous Maxwell Colette Gallery and Chicago Urban Arts Society exhibit titled “Love Flows Both Ways“, running until December, and to everyone involved in the Hot Box Mobile Galleria. 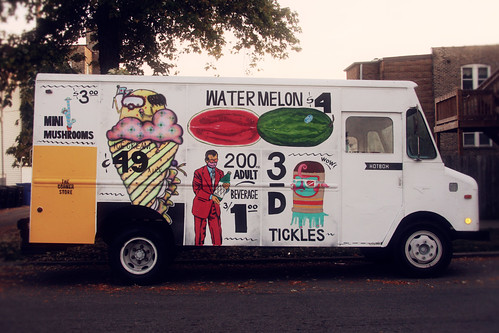 flickr photo by Joey D. More photos from the mobile galleria event can be found here.

These two artists have been appearing next to each other over the past couple of months. 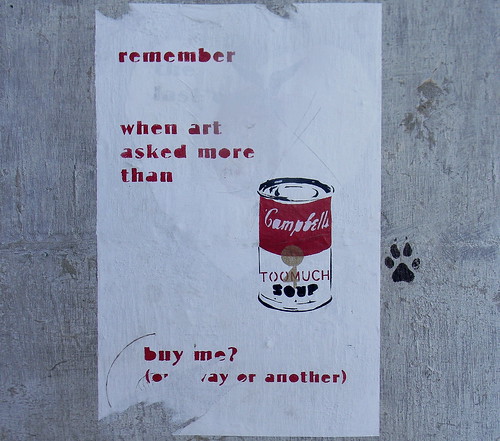 Nautilus’ other work of October is dark.  Nautilus is also responsible for the fake grain of rice website paste-ups. Confirm began stenciling this summer. 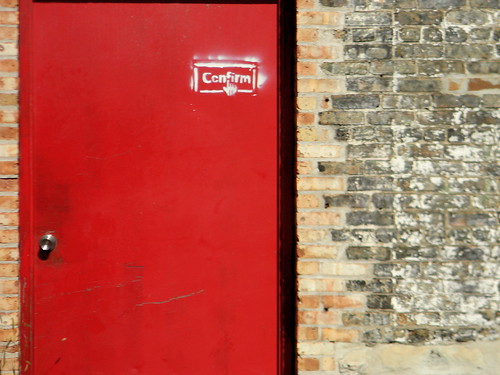 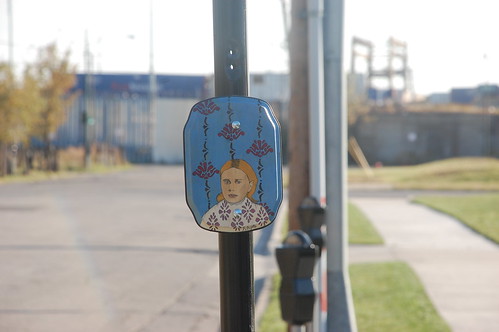 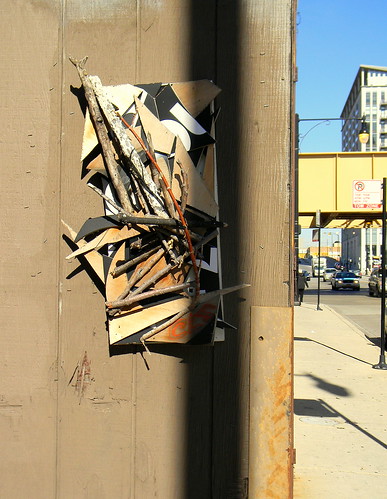 Both iconic artists are veterans of the street art scene. It looks as though the grocer’s recent mention in the Huffington Post got him/her all fired up, as s/he is back on the streets once more. Other new the grocer pieces can be seen here and here.

Swiv is in a political fever! “Swiv for Mayor” paste-ups have gone up all over the city, including over CRO’s golfing Daley. The below photo, taken by flickr user pasco33 features a collaboration with Nice One. 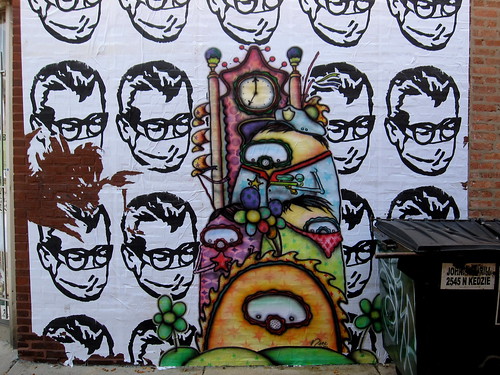 don’t fret was busy this month, but not quite like last month (see new works of an egghead, a conquistador fellow, and a blonde male) .  don’t fret has also jumped on the political bandwagon with his King Daley paste-ups. 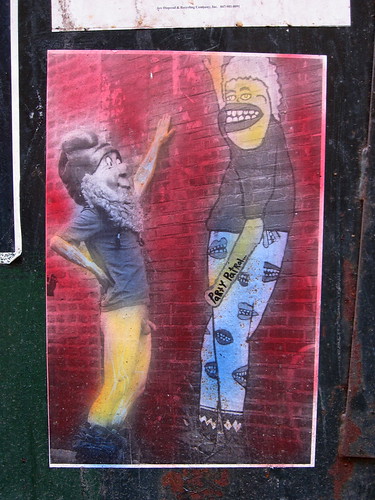 I am very intrigued by Party Patrol, and not just because this person is exposing their genitalia on the street while wearing a mask. I have yet to see the above photo in person, but I see another Party Patrol piece following this new formula every time I take the train (sometimes I wonder if that piece was left for me….).    Past Party Patrols include a woman with a frying pan titled Toasty Toots, Sir Line Backer, and people partying outrageously, naturally, but this new photographic shift in his work happened this summer.

snacki has been a roll lately,  alluding to Van Gogh and making neon faces a delight. Besides his traditional groggy faces, snacki has taken to a more structured form with the incorporation of other types of paint.  Check out this cityscape, this indoor mural (be sure to watch the timelapse), and this treescape on a garage titled “Grow More” (also with a timelapse).   Another recent timelapse of snacki collabing with dkal, roger, noteef and stal can be viewed here.

1. CRO’s Rahm in the doghouse 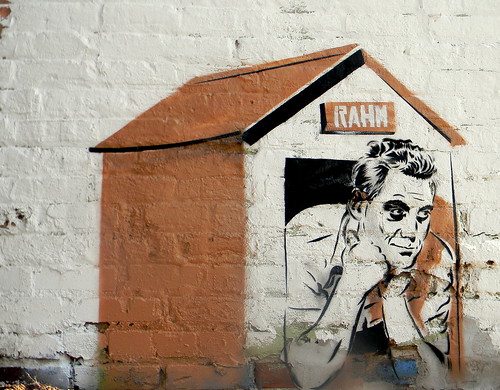 With yesterday’s elections and the current political climate, I would be amiss to give the number one spot to anyone other than CRO. Here is CRO’s Daley Golfing stencil (another one colored in), and here is CRO’s take on Republicans and Democrats.